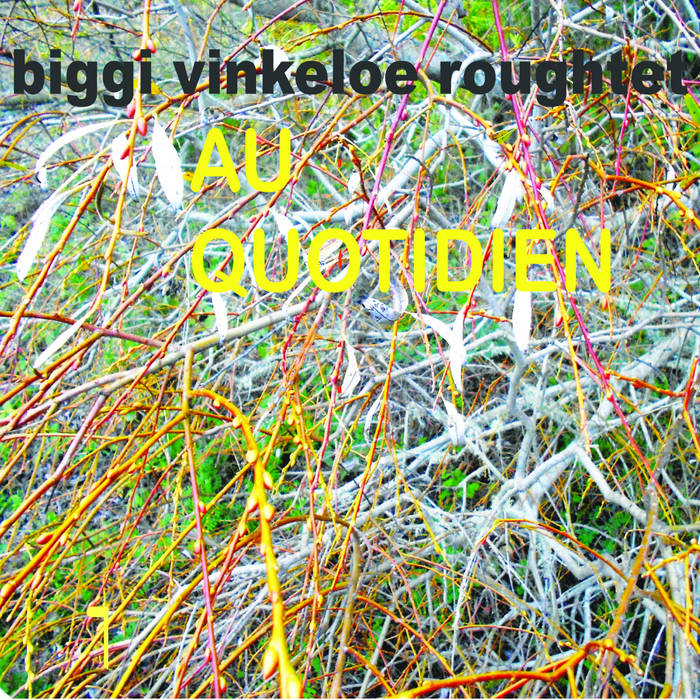 First-time gatherings can produce stellar improvised music, but there's a particular joy in the comfort of playing with friends -- not because it gets "comfortable*", but because a common bond lets the group move as one.
Saxophonist and flutist Biggi Vinkeloe has assembled that kind of crew with Au Quotidian. A resident of Sweden, Vinkeloe visits the Bay Area frequently and has built a rapport with the top-flight musicians here. With Donald Robinson on drums, Teddy Rankin-Parker on cello, and Joe Lasqo on piano and laptop, Au Quotidian mixes the confidence of the familiar with the excitement of the unknown, the musicians keying off one another's invisible cues to create a fluid, elegant machine.

Improvised music is about instinct, but it's also about careful choices. The track "do you believe this?" is artfully constructed: Vinkeloe's spare flute exclamations, Robinson's trademark fluttering of drums, Lasqo's splashes of piano. It's the music of patience, and an example of what can be created when the players let the music breathe. The band gets a "jazz" infusion from Lasqo's piano chords, adding spots of color to a stormy track like "i would think so" or the slapped groove of "je ne sais pas." His laptop electronics get snuck into the mix -- cricket noises or distorted vocal sounds blended organically into the music.

Rankin's cello spans the range from darting and slashing on "vous ne comprenez rien," to that grooving bassline on "je ne sais pas." He builds a strummed non-rhythm in "no way," backing Vinkeloe's aggressive flute explorations; that duet ends with a weeping passage that wouldn't be out of place in a classical concert hall.

On two live tracks, the band reaches another plane of creativity. "how wonderful" features Vinkeloe's joyous yet balanced overblowing and a full palette of sounds from Robinson. A longtime Bay Area favorite who came of age amid the European heyday of free jazz, he plays with deft,
efficient strokes that can add up to a deliciously pillowed sound or a daunting clash of cymbals. The solo on "how wonderful" lets us sample it all.

And throughout the album, Vinkeloe herself leads the crew through varying moods -- the spiky excitement of "vous ne comprenez rien," the dark, unhurried mystery of "cela commence mal." She spins powerful tales herself on the horn, but this band carries those talents to another plane -- four storytellers, weaving a narrative together.
- Craig Matsumoto