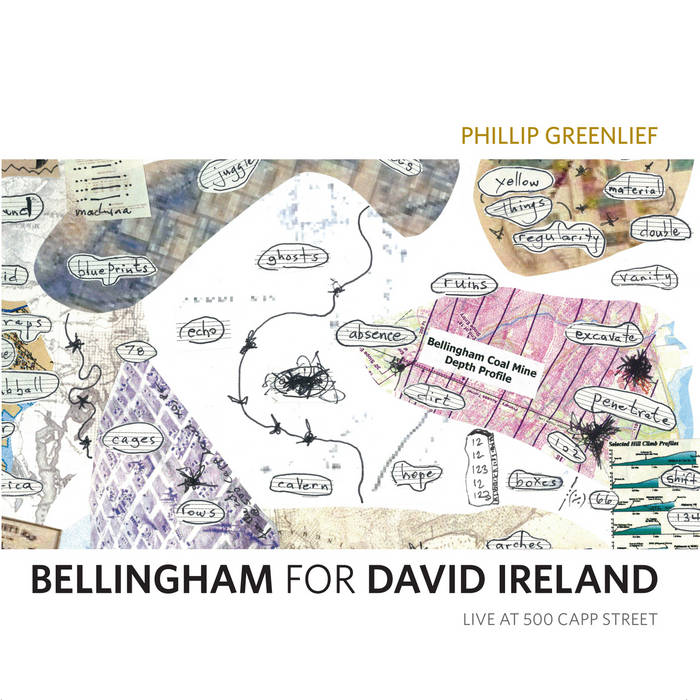 Bellingham for David Ireland, one of Greenlief’s forty or so map-works, is made from cut-up and color-copied maps of Bellingham, the small, bayside city in northwestern Washington where the titular artist grew up. Each section references a part of Bellingham or Ireland’s life, and includes a cluster of themes and suggestions for performers: the bay, for resting and listening; the lavender street grid, for considering impositions on open space; the beige topography, for responding to nearby objects; the scale of the town’s hills, for emphasizing dynamics. Another section, with imagery related to Bellingham’s coalmine, suggests players conjure sounds that they imagine boring deep into the earth.

This recording, inventively engineered by Phil Perkins, doesn’t convey attendees’ experience of the performance; it’s not a self-guided tour through an ephemeral sound installation. It collapses two stories and several rooms, renders them level and balanced. But it’s kinetic and lively, and, for this attendee, augments a tangled memory of the sounds. Greenlief’s instructions to the players to dispatch sounds downward into the soil (inspired by Ireland’s obsession with excavation), in particular, manifest in the trilling, resonant pulses; hear the spiraling discord around the 12-minute mark. Its sleight of hand, with the false sense of players’ actual proximity that night, suits Ireland’s oblique streak, his taste for misdirection. — Sam LeFevbre

"it should be obvious that this work would not be what it is without the incredible contributions made by the musicians. i composed a score that would enable them to create and use the space that they occupied. we were all in different rooms - for some it was easy to hear the person in the next room - i (selfishly?) put myself at the foot of the staircase, so i could act as a kind of conduit between the upstairs players and downstairs players. several of the musicians said they felt that i was conducting with my sounds. i had the same experience listening to them - we were both inspired by the score and the place, but mostly by each other. i owe the success of this recording to wobbly, karen, kip, gabbly, aurora, zachary and carl ludwig. really, i couldn't have asked for a better group to realize this score.
personal thanks to: claudia la rocco, connie lewallen, phil perkins, and everyone who attended the performance". - Phillip Greenlief