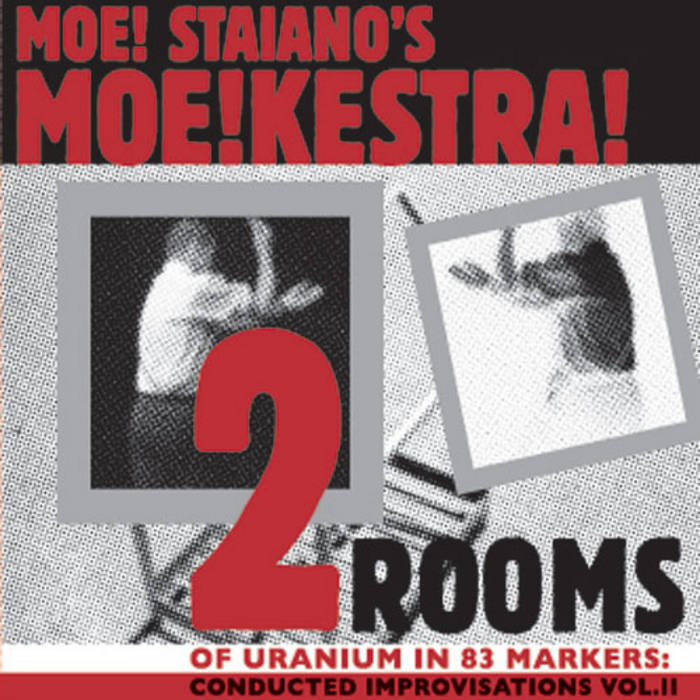 This album documents two live performances at the former venue, the Oakland Box Theater, in Oakland California. The first show was a fun, fast and quick performance with a small group of about 10 musicians, small by standards, compared to the more desired 25-40+ ensemble the Moe!kestra! is known for. The evening was part of a benefit show ‘LET'S USE OUR CRANIUM AND LEARN ABOUT DEPLETED URANIUM’ back in May of 2003. The event called attention to the health and environmental effects of depleted uranium (DU) weaponry being used by the US military in Iraq and Afghanistan. The performance featured a few notations Moe! had composed a few hours before the show that he handed to all the musicians, which as always puzzled and concerned the performers prompting them to ask if they need to play their parts perfect and note-for-note. Moe!’s answer to that is normally a coy shrug.
One of Moe! Staiano’s most challenging performances to date, the second part of this CD were recorded in two separate rooms connected by a short hallway conducted simultaneously. Each room is assigned to either the left or right channel giving the listener a true live sound experience.
Overall, the end result is a directed improvisation composition that, with two separate, yet combined orchestras, produced clusters of sound interlocked with each other. If one was to walk anywhere during the live performance an experienced in fragments would have been the result. Here on this record you get to experience the unity of Moe!’s creation with all the individual groupings from each corner of the performance space performing as one.