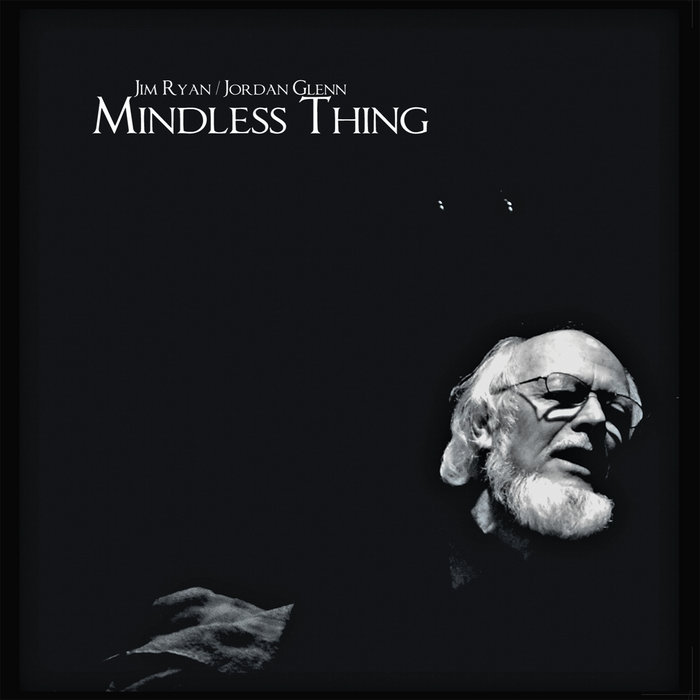 Mindless Thing is a collaboration between drummer/composer Jordan Glenn and saxophonist/band leader/poet/artist/sage Jim Ryan. The music, composed and conducted by Glenn, takes malleable material and filters it through a unique ensemble of strings and percussion. The result is used to create a backdrop for Ryan's surreal and haunting poetry.

Poet, writer, philosopher and musician, Jim Ryan is an original member of the exploratory family of artists of the 20th century. His powerful playing style and truly original voice permeates with vibrant spirit.
Jim Ryan was born in St. Paul, Minnesota and began listening to bebop at age 15. In 1958 after obtaining a degree in philosophy from the University of Minnesota, Jim was drafted into the army and sent to Europe. After serving for 21 months, Jim found himself attending the Sorbonne in Paris France. A short time after he became involved with the beat poet community that was blossoming in France and throughout the world, rubbing elbows with such poets as Boroughs, and Ginsberg.
In 1968 Jim was given a wooden flute and shortly thereafter acquired a c-melody sax. At the same time many of the American new music musicians, Sonny Murray, Albert Ayler, Sun Ra, Archie Shepp, Anthony Braxton, and the AACM were given funding by the US Government and settled in Europe including France. Jim was in the right place at the right time and found himself jamming and performing with these rebels of creative music. As the migration of cutting edge American artists continued more straight ahead artists like Johnny Griffith and Steve Lacy began to arrive to take advantage of the European scene. In the early 70's Jim participated in a yearlong workshop organized and led by Steve Lacy while continuing to develop his writing.
In 1975 he returned to the United States in search of a fresh start and settled in Washington, D.C. where he formed the Art Performance Group performing throughout the area. In 1987 he moved California and lived in Marin County until 1993 when he moved to Oakland and became part of the San Francisco Bay Area improv and jazz scene. After a long hiatus, in 1997, he launched his freejazz unit Forward Energy featuring stellar artists like trumpet player Eddie Gale and drummer Donald Robinson. Jim also performed with Marco Eneidi's "American Jungle Orchestra," and Eddie Gale's "Orchestra for World Peace." In 1998 he became the editor and publisher of Outside, an underground art and music zine in Oakland, which featured such artists as Positive Knowledge, Marco Emeidi, as well as many artists of Bay Area improv scene. In the spring of 2000, he founded the Electro/Acoustic Sextet of Oakland, which was a melding of free jazz and avant academic styles. The group performed in Oakland and at the Big Sur Experimental Music Festival in May 2000. In the spring of 2000 he performed in the 401 Festival at Theater Artaud in composer Matthew Burtner's piece for nine tenor saxophones, "Portals of Distortion." In 2015 he moved back to the Washington D.C. area.